This year we decided to throw a Princess theme party for October. I got the majority of my ideas off of Pinterest and added a few changes of my own to a few of them. I am just going to list everything on here as they appear on my Pinterest page.

The first thing is my wishing well. There were two different sites I used for inspiration and I still couldn`t figure the dang thing out. So this was what I came up with. I took a big cardboard box and wrapped it up with wrapping paper. I then put 2 round tubes inside the box. To hold them up all I did was arrange some smaller boxes inside the big box. The top is just another piece of cardboard and wrapping paper. The bucket is an old Easter bucket the kids got awhile back held up with some string.

The inspiration (and the much better versions) can be found at these sites: http://jjcreativesupport.blogspot.com/2013/02/disney-wishing-well.html and http://boards.weddingbee.com/topic/diy-diaper-wishing-well-other-fun-shower-stuff-pic-heavy/

I had really high hopes for this one. I couldn`t get it to turn out quite right but the kids really loved it so that`s all that mattered. For the sign I just Googled pictures of Elsa and saved them onto my computer. I opened them with my Paint app and added the word text of Elsa`s Magic Ice. Then I just glued it onto cardboard. For the ice I just put some into my blender the night before. My blender does not have a crush setting so it took a long time to get it to where I wanted it. So, I just decided to pull out my Magic Bullet. I couldn’t put as many ice cubes in there as I had in the blender but they got to the consistency I wanted quicker. I put the ice into baggies so I could crush them up easier the day of the party. Then I just put the ice in the green bowl pictured and put an ice cream scoop in it. The syrup was really easy to make. It was just one Kool-aid packet and sugar. Then I just poured the syrup into ketchup and mustard bottles we picked up at Wal-mart. You can find the exact recipe in the link below the picture.

The younger kids all thought this was cool. The oldest not so much. Tinkerbell`s fairy dust. Once again I used paint for the picture following the same steps as above. The fairy dust was just salt and blue food coloring. I used one cup salt and 10 drops of food coloring. I just mixed it all up in a Ziploc bag. After it was all blue I added glitter. I let the kids scoop out their own dust and put it into their own baggies.

Next is the “candy” necklaces the kids made. This was probably their favorite thing at the party. I got various circular snacks: peach rings, pretzels, life saver gummies, and fruit loops. I put them all into various plastic cups. I had bought yarn to use for the actual necklace part. I went around to all the kids and measured their yarn out to where they could take it off and on easily. I just put the yarn around their neck and made it big enough for them then cut the yarn. Then the kids went to town. They all picked what they wanted and how they wanted it to be placed on. My mom and S helped out a lot with this one. After the kids finished their necklaces they all got ring pops so they could be completely dazzling. 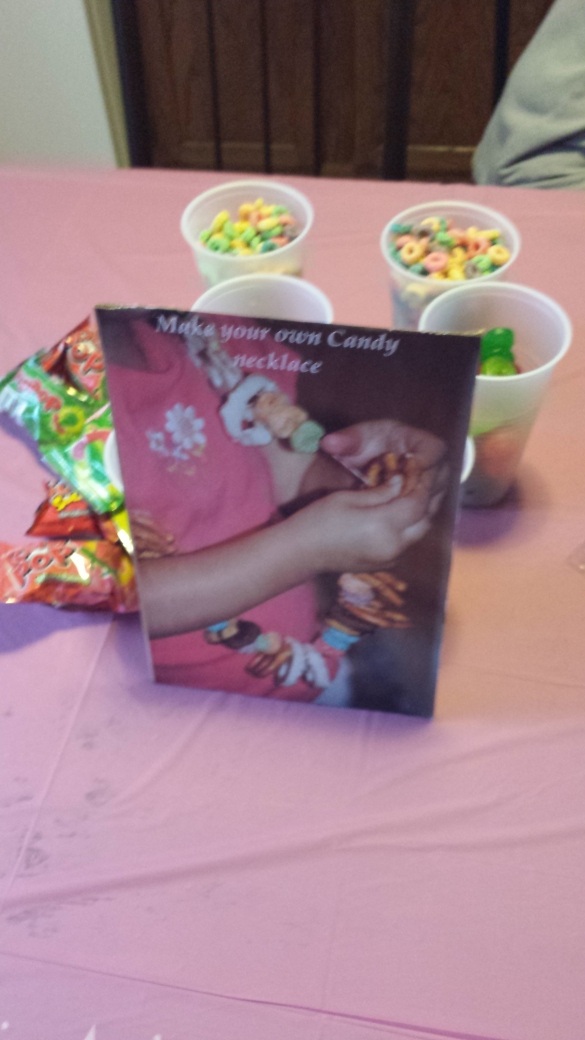 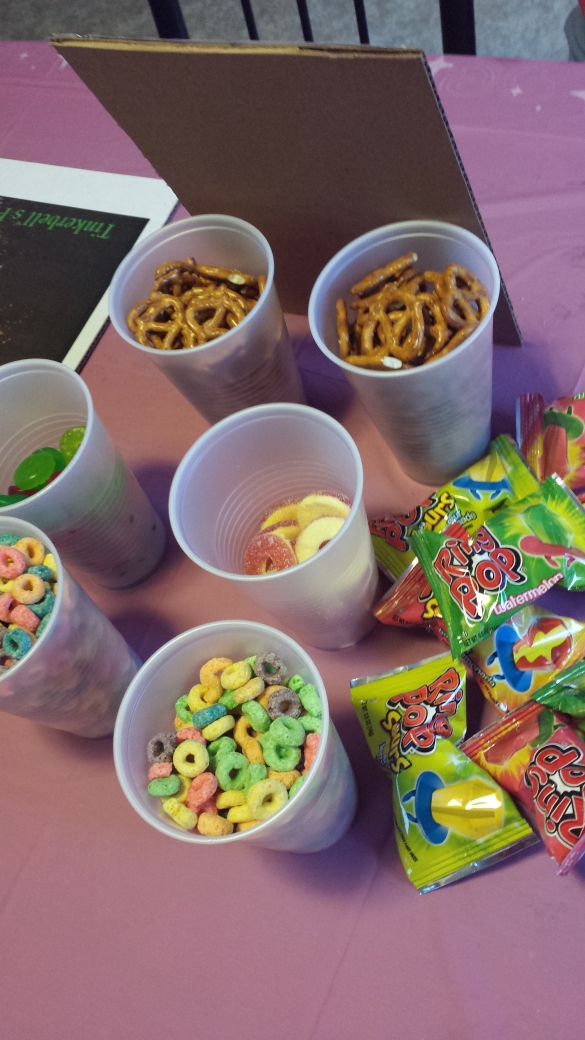 All the kids creations. They loved this!!

The food was good. No one really ate the little snacks I made up. They basically stuck to the pizzas we had ordered. I had found a huge list of ideas but only picked a few of them. I am glad I did too. So to snack on there was Snow whites (non) poison apples. Les Poisson’s goldfish crackers .(Ariel) Jaq and Gus-Gus cheese squares. (Cinderella) Jasmines magic carpet crackers. (Club crackers) The main meal was Cinderella’s clock tower pizza. 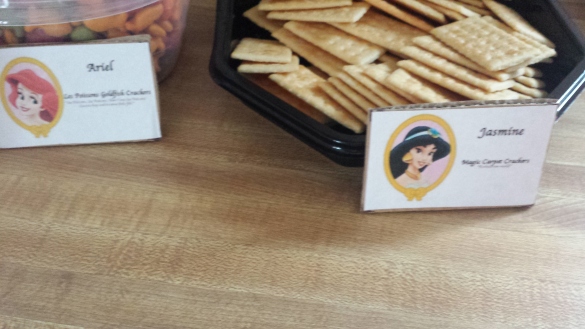 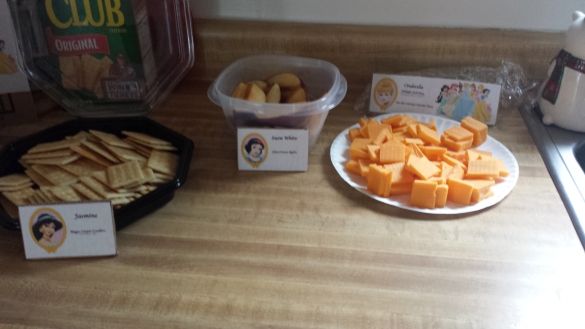 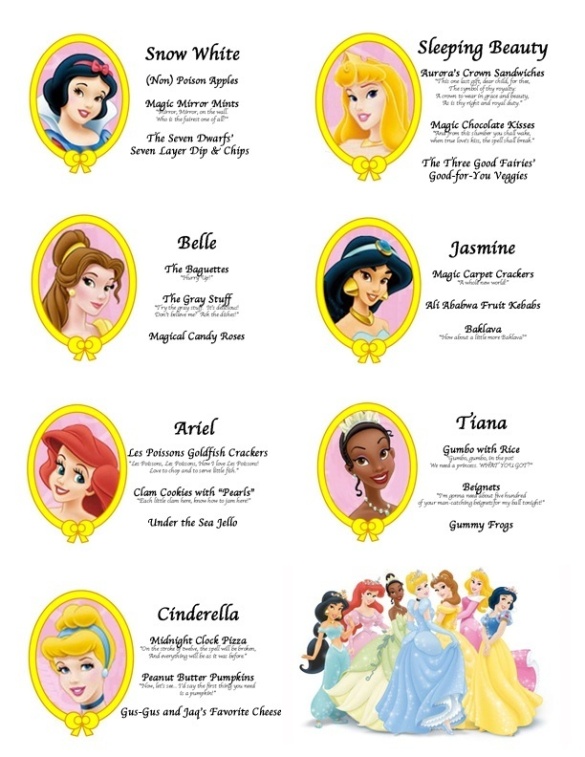 While the kids waited for me to get everything set up in the kitchen had them color princess pages (that I had just ripped out of a coloring book) and make magic wands. 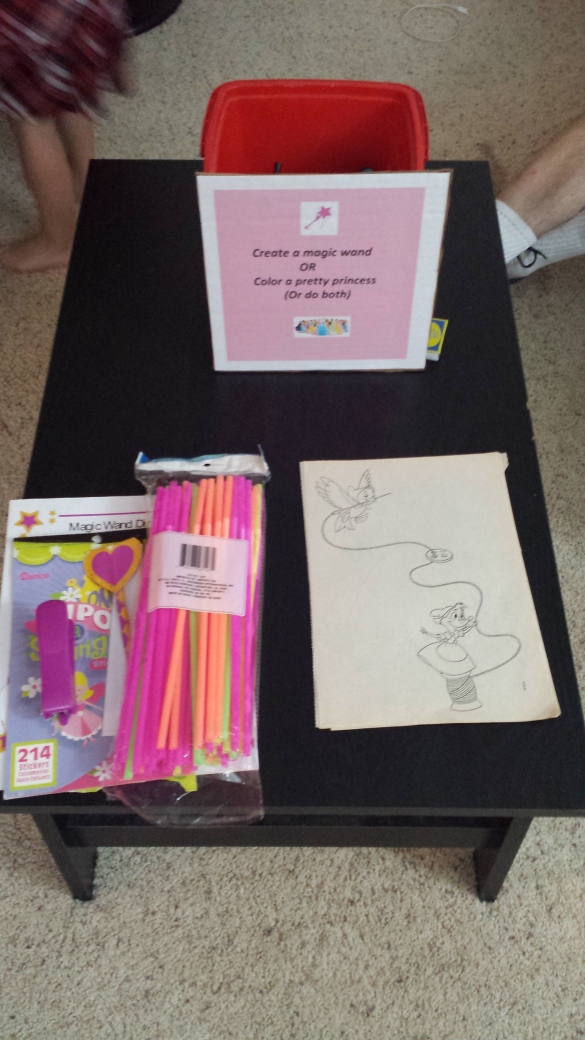 I actually got the Magic wand directions here: http://www.partyblog.mygrafico.com

The cupcakes were a complete disaster. This one goes in the books as a Pinterest fail. I could not get them to look anything like the ones pictured so I am not even going to tell you how I did mine. I originally found the inspiration here but now I can’t find the right place on the website for them. Don’t pay attention to the cups on them. I was trying not to ruin them anymore than they already were.

The rest of the games I just put together myself. We had a Frozen photo booth. Made out of a cardboard box, wrapping paper, and Frozen picture print offs I found online.

We had a “snowball fight.” Which was just a water balloon fight with white balloons. I got the balloons from Wal-mart and they WOULD not burst for anything. S was even throwing them and still nothing. So if you want super strong balloons, go to Wally. 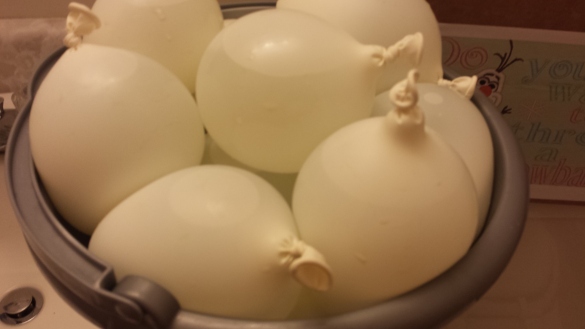 We played the snuggly Duck inn game. I bought some floating ducks ( I thought they would float anyways) and wrote the numbers 1 and 2 on the bottoms of them. I placed them in a bowl of water. The kids would each grab a duck and won a prize that coordinated with that duck. The prizes were Ice cream shop bubbles or Princess bracelets. 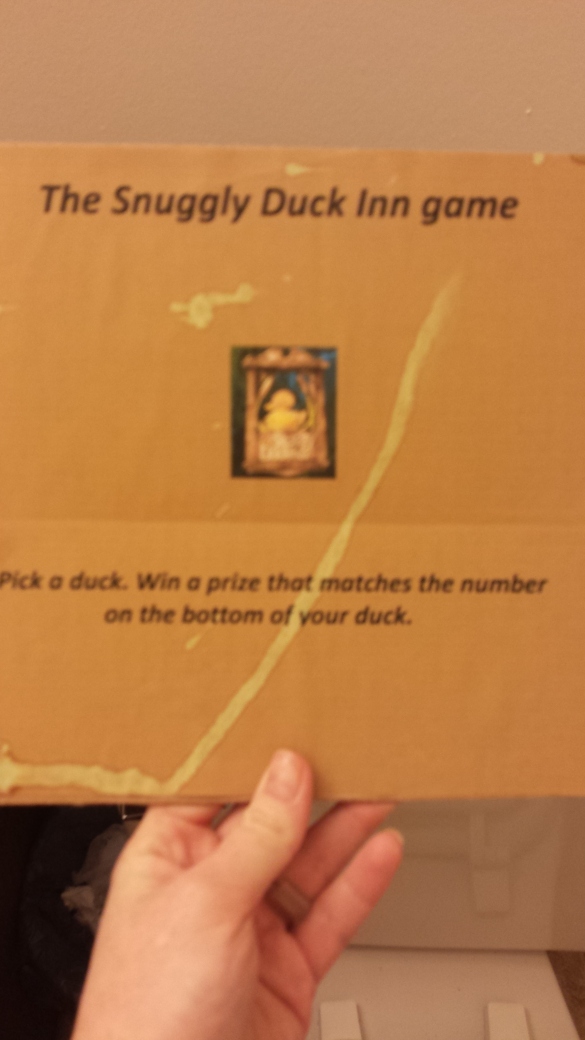 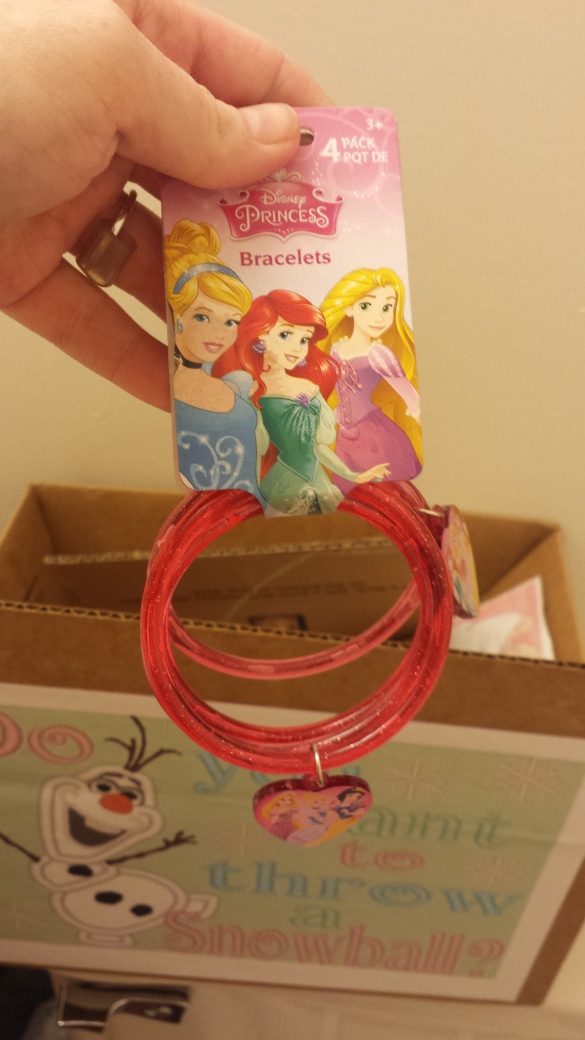 The last thing on the agenda was Bobbing for apples. Only the two older kids would do this. The younger ones wouldn’t even put their heads in the bucket. LOL.

Overall, the party was great. Some flops here and there. It was all worth it when the birthday girl told me “This is the best birthday party ever.” Made my day. 🙂