*As of, July 1st 2016 when you visit 30 Days of Candy`s site you will encounter this message: “Thank you for visiting. 30 Days of Candy is closed indefinitely. If you need to contact us, please email custserv@30daysofcandy.com”

30 Days of Candy is a subscription box that sends 30 individually packaged and portion controlled (each package contains serving size and calorie information) candies every month. Every box sent is themed.

When I signed up for 30 Days of Candy I was given the option to choose either “The candy of our grandparents: Candies that have stood the test of time for at least 80 years, often longer.” since it was my first box. Or I could have went with “Around the world in 30 sweets: Candies from different countries.”

There are several different themes that this box offers: (offered)

You are also given the option to choose either 30 or 15 candies. 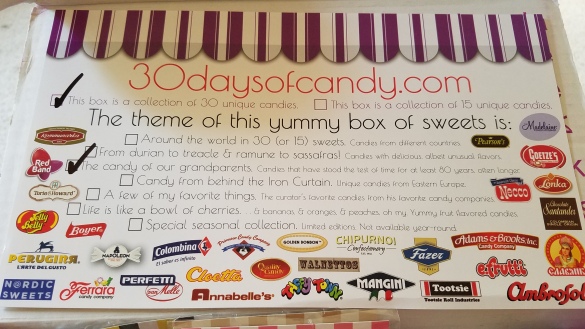 The back of this card has the Preamble of the Constitution done in candy logos. 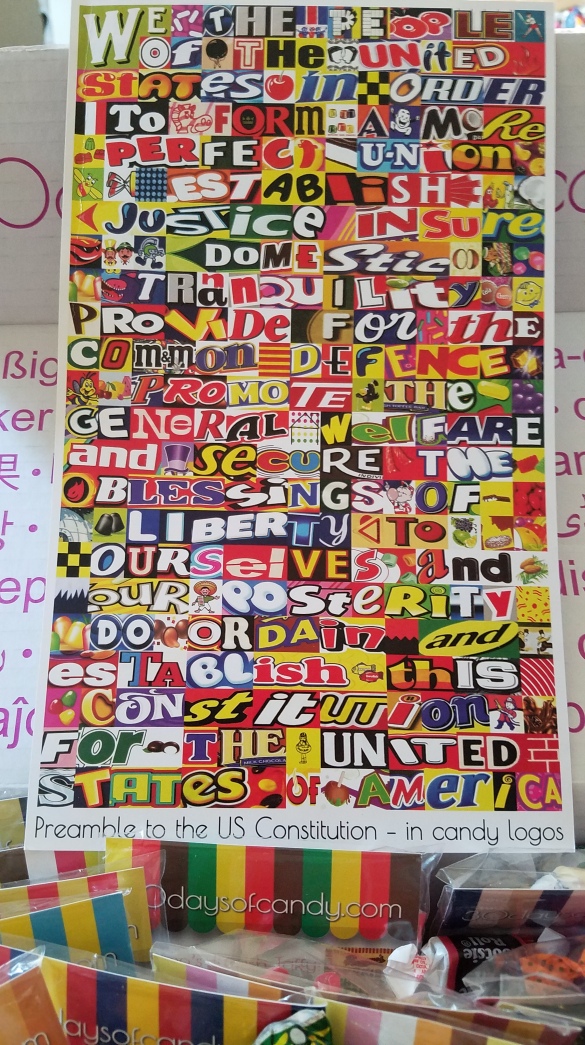 We decided to go with the 30 days grandparents box and now that they are no longer in business I am glad we did.

Charleston Chews: Were named after the Charleston, a popular dance from the 20`s.

Mint Humbugs: In the UK a “humbug” is another name for a boiled sweet.

Gone but not forgotten: From the makers of Peeps and Hot Tamales. Root-t-toot, Jolly Joes, Kool Kids, Jack and Jill.

Abba Zabba: Abba Zabba is still available today. They are made in Hayward, CA.

Gone but not forgotten: From the makers of Abba Zabba and Big Hunk. Annabelle`s Sir, Smuggler, Baffle.

Red bird peppermint puffs: These puffs are made by hand. Each one is unique, like a minty snowflake.

Wilhelmina Mints: Dutch confectioner Fortuin has been making mints since 1842.

Gone but not forgotten: Makers of Peeps and Hot Tamales also used to make, Lem and Mel, Cherri and Bubb. 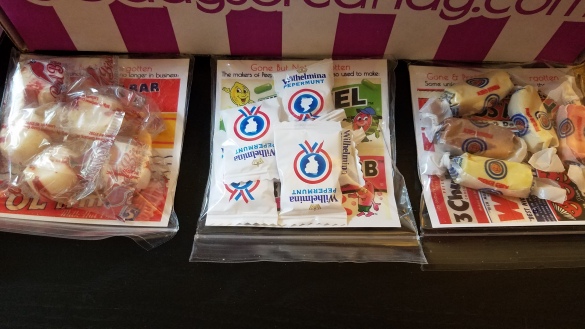 Black Taffy: Manufactured by Primrose Candy Company, one of the last remaining family owned candy companies still in the US.

Gone but not forgotten: The makers of M&Ms and Snickers also used to make – Marathon, Summit, and Snickers Peanut Munch.

Root Beer Balls: Root beer is one of the oldest flavors in America.

Gone but not forgotten: Hershey`s used to also make, Hersheyets and Aero with almonds. 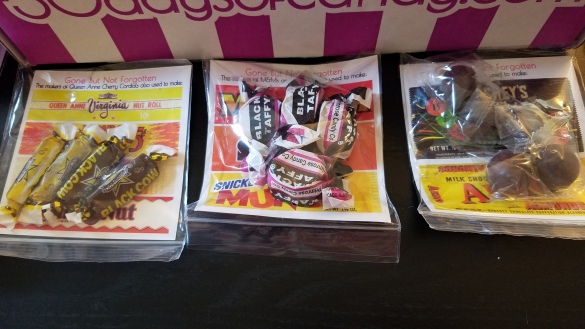 Bonomo`s Turkish Taffy: Once owned by the Bonomo family, Tootsie Roll Industries eventually bought the brand but discontinued it in the 1980s.

Gone but not forgotten: It`s kind of hard to see in the picture but this one shows the evolution of the Snickers wrappers.

Peanut Butter Taffy: The story goes that a circus elephant crushed Nettie Fralinger`s bag of peanuts, and they got mixed up with her taffy, thus creating this delicious flavor combination. 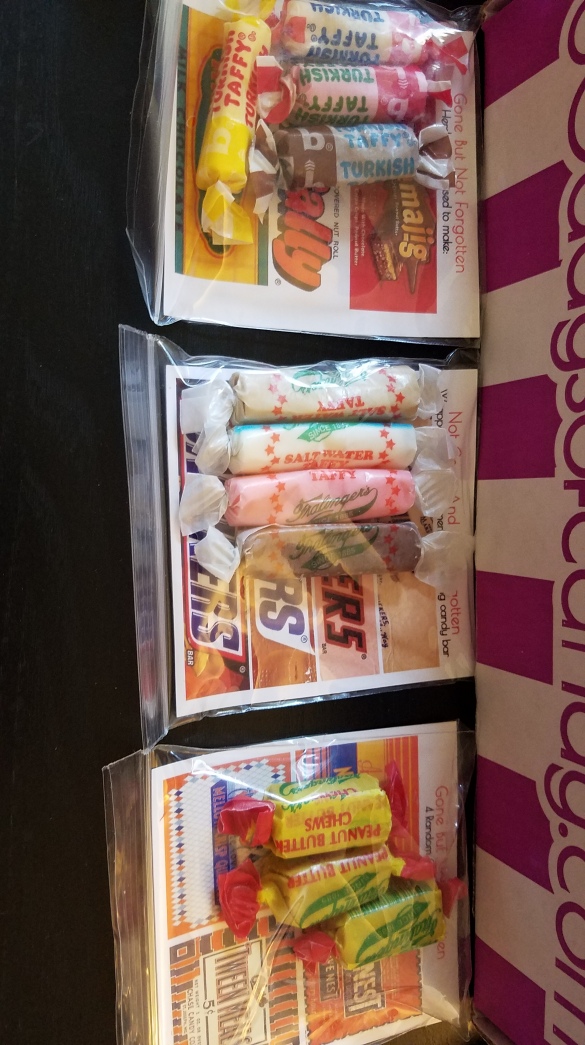 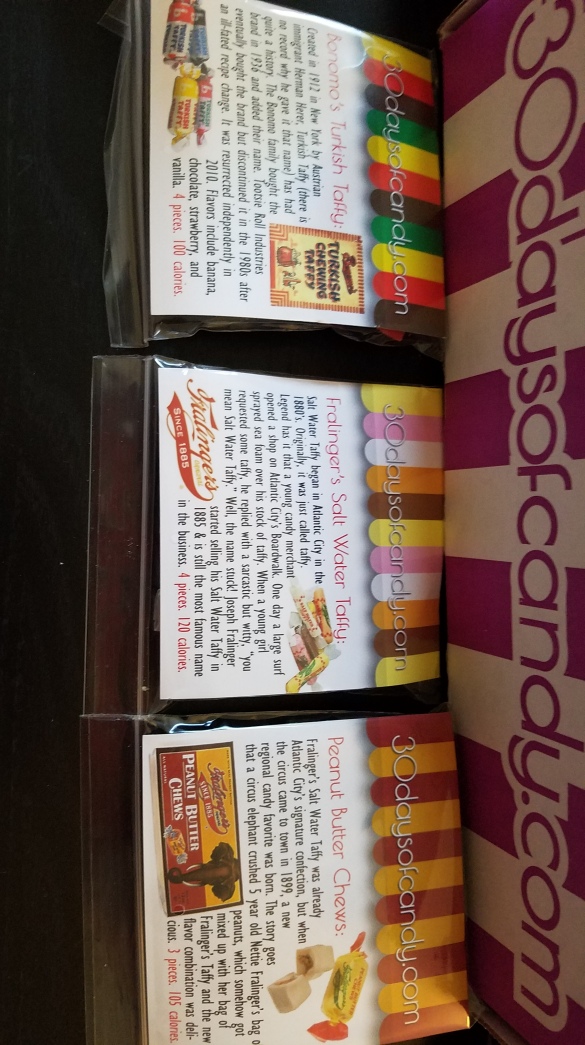 Mary Janes: Mary Janes were first made by Charles Miller in his Boston home, once owned by Paul Revere. Today, they are made by NECCO in Revere, Massachusetts.

Richardson Pastel Mints: These have been in continual production for over 120 years.

Sour lemon balls: FB Washburn is the oldest family owned candy company in the US.

Kits: These candies are made by Runk candy out of Cincinnati.

Gone but not forgotten: The makers of the defunct Love Nest used to make: OK Boss, Bob Feller, and Skipper.

Everton & Murray Mints: Everton mints are 110 years old and are named for the Everton Football Club.

Gone but not forgotten: Makers of Payday also used to make: Double Chocolate and Vanilla Nut Sundae and Coconut Tuesdae.

Good & Plenty: These candies were made after William Rosskam won a bet at a race track on a horse named “Good and Plenty.”

Gone but not forgotten: 4 Vintage wrappers that have a unique chilly theme – Polar, Snowdrift, Snow maid, and Snow Wonder.

Hopjes: A typical characteristic of these candies is that they do not stick or go soft over time.

Necco Wafers: Over 630 million of these candies are made every year.

Gone but not forgotten: Bolster, Sky Pepps, and Munchies all used to be made by Necco.

Atomic Fireballs and Lemonheads: Ferrara Pan candy are the #1 non chocolate candy in the US and no longer use “Pan” in their name.

Gone but not forgotten: Tuppence, Curtiss, and Wings all made by the makers of Butterfinger and Baby Ruth. 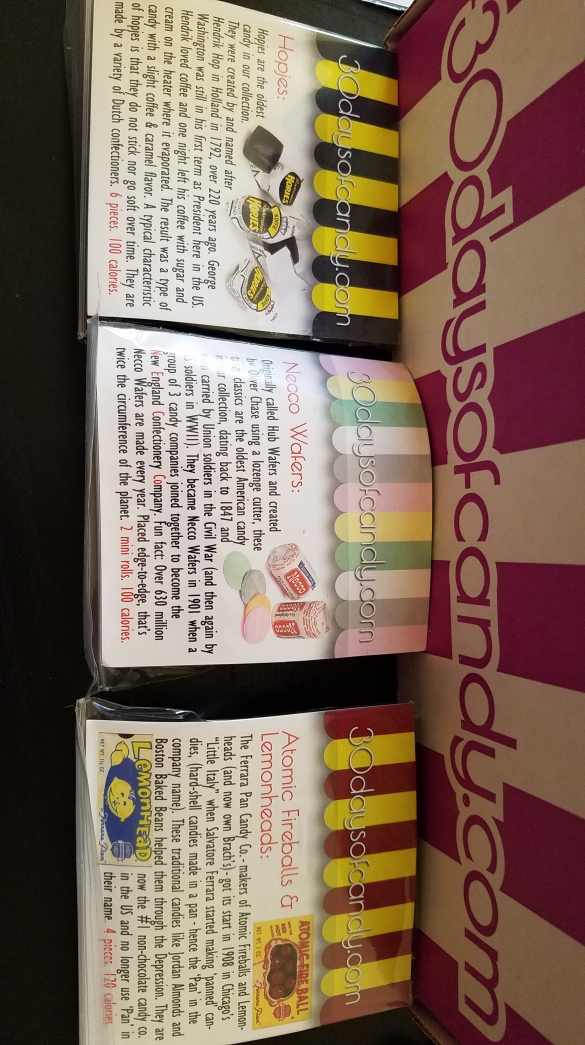 Squirrel Nut Zippers: A retro swing band in the 90`s went by this same names and gave out the candy during their performances.

Gone but not forgotten: This candy company went out of business in the 1970`s. Pieces Chew all the way, nut Cargo, and North Pole.

Zeeuwse Babbelaars: These candies have vinegar and salt in the ingredients.

Gone but not forgotten: Denver Sandwich, Chicken Dinner, Brunch. Candies that were named as if they were meals. 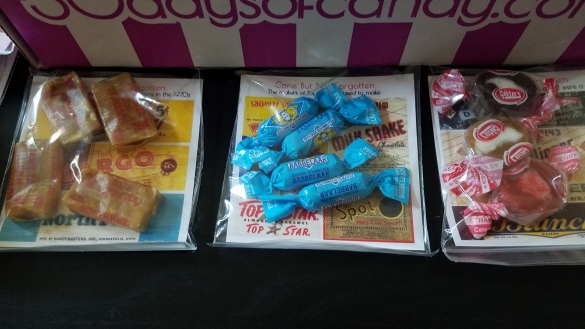 Butter mint rolls: These combine the creaminess of butter with cool peppermint.

Gone but not forgotten: Shows The Wonka Bar throughout the world and the years.

Maple Walnut Chews: Made by Primrose candy company who began in Chicago one year before the stock market crash & this candy helped them survive.

Gone but not forgotten: Powerhouse, Caravene, and Smile- a – while. All made by the makers of Mounds and Almond Joy. 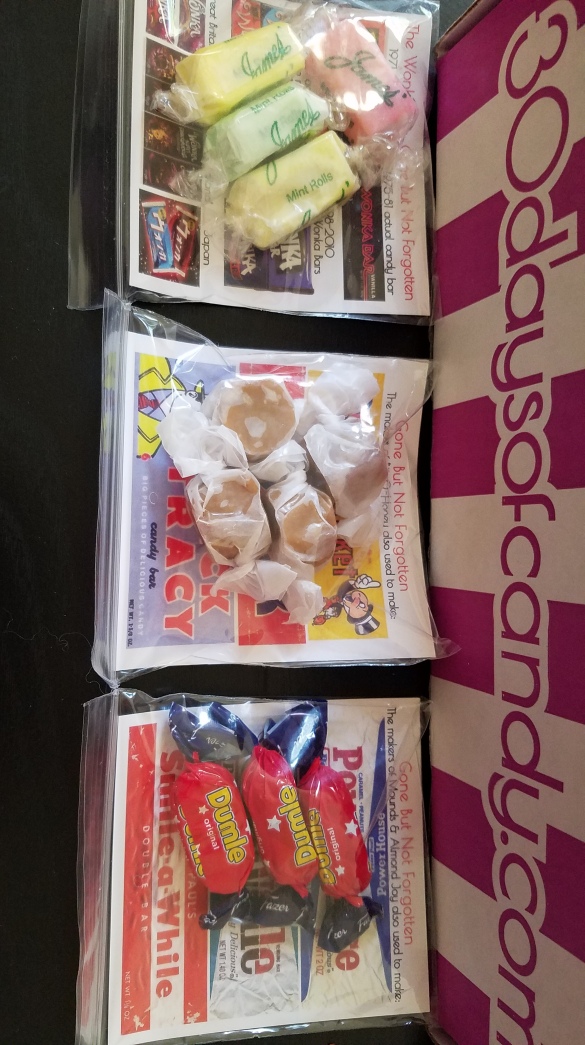 Walnettos: Walnettos are part of the US military`s MRE (meals ready to eat) and voted as a favorite candy by soldiers.

Gone but not forgotten: WalnutHill, Coconut Hill, and Brazil Hill.

Peanut Butter Bars: These are made by the same company that makes Chick-o-Sticks.

Gone but not forgotten: Shows Hershey`s and the US military.

Gone but not forgotten: Shows the evolution of the Hershey`s chocolate bar.

I feel that for ALL of the candy we received that the pricing for this box was well worth it. I also had a coupon code that I used to save 30% off.

The shipping for this box was extremely fast. I purchased this box on June 28th.  The box was sent via USPS Priority Mail in a flat rate 1 box. On June 29th, I received an email stating that my box had been shipped. My tracking number was sent separately. My package was delivered on Friday July 1st!

Worth it? I really enjoyed this box and I cant wait to do our un-boxing  video for it! I know that kids are going to love it as well.  I like the little individual packages of all the candies. My husband will enjoy the calorie information since he really trying to keep an eye on what he is eating now a days.

As far as the price and value for this box, I would say its worth it. It`s about a dollar per bag of candy. And the shipping is definitely worth it for as fast as we received it.

What are your thoughts on 30 Days of Candy?

Be sure to check out our un-boxing video for this box. We will also be taste tasting some of the candies that are not well-known. You can check that video out by clicking here.