Hey everyone S here with my review of February’s LootCrate. Since I’m a little behind I’m going to jump right into it. This months theme was PLAY.

So first up we had a Munny vinyl figure. This was a blank figure so you could style it in anyway you saw fit. It came with 3 markers. Now I’m not very artistic so this doesn’t really intrigue me to much because it would turn out looking very “special”. I also understand that they want you to be creative and have imagination but I really don’t understand how this fits into the monthly theme. If you buy these off of the Munny website they are around 19.99 but they appear to be sold out. I found one on amazon for 11.99 plus shipping. http://www.amazon.com/Munny-Customizable-Figure-February-Exclusive/dp/B00TVX4OAY/ref=sr_1_1?ie=UTF8&qid=1430774341&sr=8-1&keywords=mini+munny 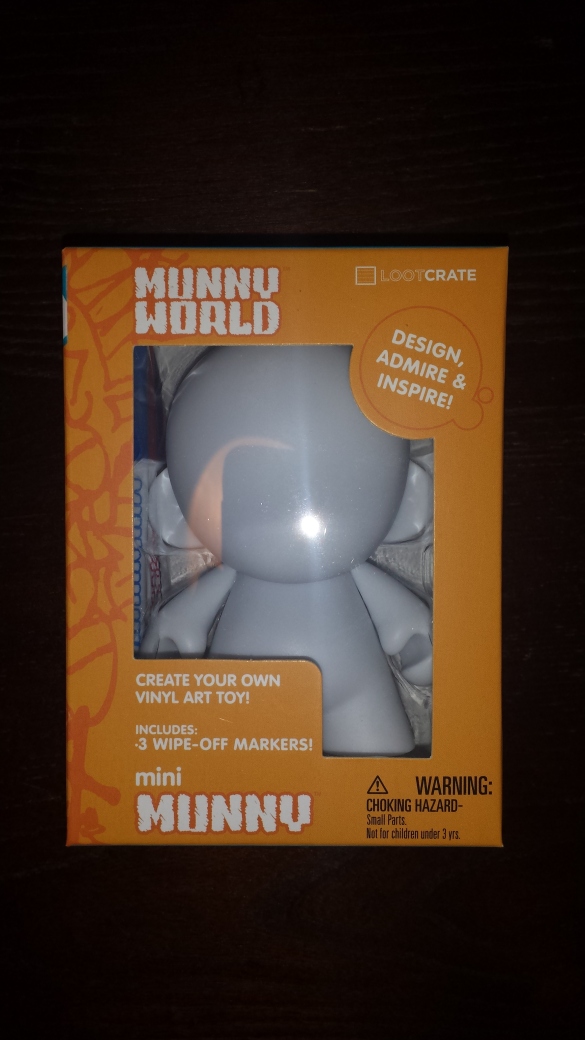 Also included in this box was a novel written by Ernest Cline called Ready Player One. I had never heard of this book prior to receiving this box but the concept has me interested, here is the synopsis taken from the website.

Like most of humanity, Wade Watts escapes his grim surroundings by spending his waking hours jacked into the OASIS, a sprawling virtual utopia that lets you be anything you want to be, a place where you can live and play and fall in love on any of ten thousand planets.

And like most of humanity, Wade dreams of being the one to discover the ultimate lottery ticket that lies concealed within this virtual world. For somewhere inside this giant networked playground, OASIS creator James Halliday has hidden a series of fiendish puzzles that will yield massive fortune—and remarkable power—to whoever can unlock them.

For years, millions have struggled fruitlessly to attain this prize, knowing only that Halliday’s riddles are based in the pop culture he loved—that of the late twentieth century. And for years, millions have found in this quest another means of escape, retreating into happy, obsessive study of Halliday’s icons. Like many of his contemporaries, Wade is as comfortable debating the finer points of John Hughes’s oeuvre, playing Pac-Man, or reciting Devo lyrics as he is scrounging power to run his OASIS rig.

And then Wade stumbles upon the first puzzle.

Suddenly the whole world is watching, and thousands of competitors join the hunt—among them certain powerful players who are willing to commit very real murder to beat Wade to this prize. Now the only way for Wade to survive and preserve everything he knows is to win. But to do so, he may have to leave behind his oh-so-perfect virtual existence and face up to life—and love—in the real world he’s always been so desperate to escape.

A world at stake.

A quest for the ultimate prize.

I have yet to read this but eventually I will get around to it since they are in the process of turning this into a movie. There are several ways to purchase this if you want paperback it’s 7.58 on amazon or you can get it used for even cheaper. http://www.amazon.com/Ready-Player-One-A-Novel/dp/0307887448 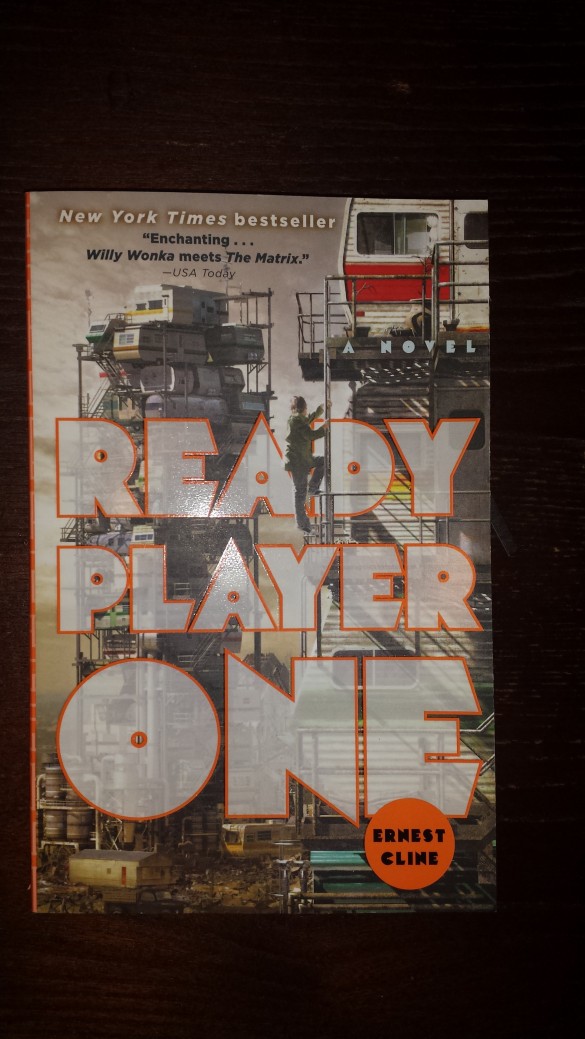 Here we have two exclusives the first one is a Looter Edition SUPERFIGHT card game made by Skybound games. Here’s what the official LootCrate magazine says about it. ” SUPERFIGHT is the fast-paced card game that pits super heroes and super villans, those with super powers and super problems, against each other with hilarious results. Our Looter edition has exclusive cards and scenarios you won’t find anywhere else.”

Ebay has the superfight cards from 2.99 and up but those are bids. I saw a buy it now for 11.99. The cheapest I could find the dice game for was on ebay for 3.99 with free shipping. 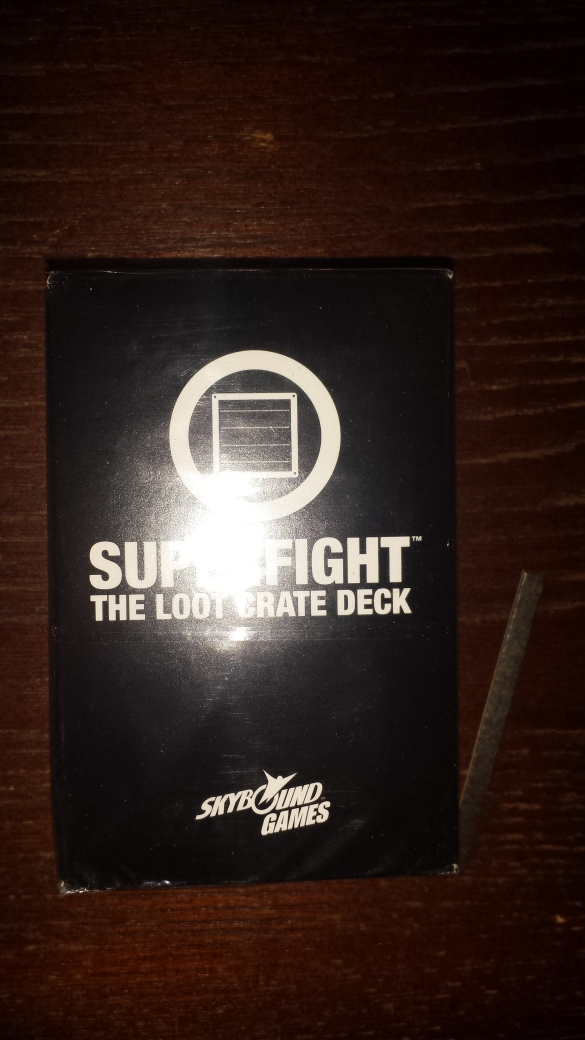 This box also included a HEXBUG. Now I don’t know to much about these things other than the fact they are a children’s toy (right up my alley). And that they are a robotic bug. I really like the designs for these and red is my favorite color so it was automatically a winner for me. Now I had trouble finding this version of HEXBUG so I assume these were an older model but I did find one on amazon for 11.24 with free shipping. http://www.amazon.com/Hexbug-Ant-Colors-May-Vary/dp/B0035YAG3Y

Last in our box (minus the pin which i will picture and the monthly mag) were a waka-waka poster by Manny Peters and an exclusive Firefly online premium ship unlock. This poster is pretty cool its a Pacman cartridge split into layers with an image of the game in the center and the logo above it and wiring below it in a blue print style. I found this on amazon for 10.00 plus shipping but you may be able to find this cheaper somewhere else. http://www.amazon.com/Waka-Waka-Manny-Peters-Cartridge-Blueprint/dp/B00TVO3PSA 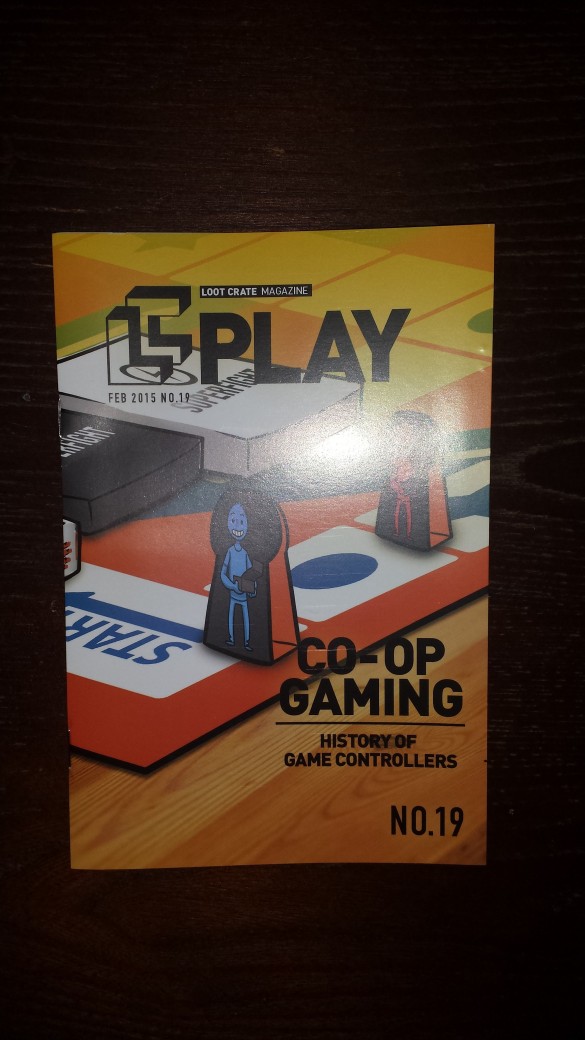 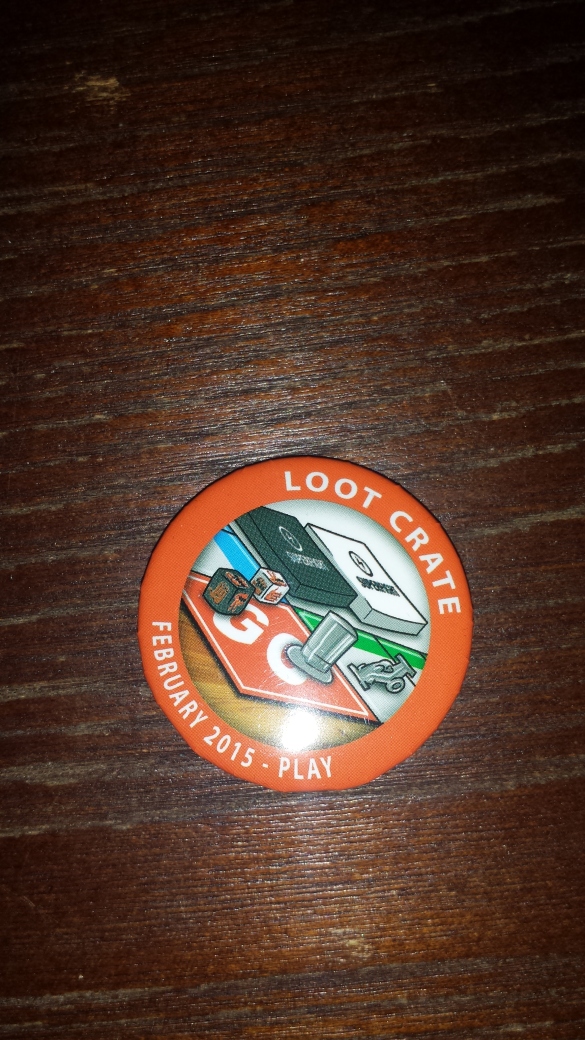 So that’s it for February’s box overall it was a pretty meh box in my opinion my first two boxes were jam packed with goodies. I felt this was a valiant effort but i guess people have different tastes and this just kinda fell short for me. I paid 19.99 for this box and the overall value based off of what i found was probably around 65.78 plus whatever the cost for the premium firefly ship will be. So overall again not bad value for the price of the subscription. as always if you’re interested in giving Loot Crate a shot I would appreciate if you used our referral code http://looted.by/bW2cY. See you next time!